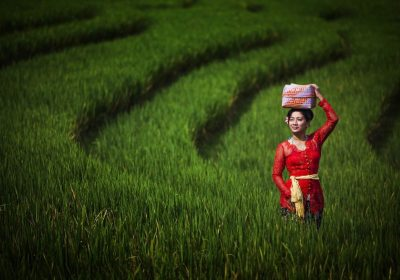 I arrived in Bali from London, on the 3rd January 2009, armed only with three suitcases and two small children.

My two girls were aged 6 & 7, we had school places booked and enough money for a year off work.

Many of my friends thought I was very brave…
… but bravery was not a word that had entered my head.

I had to resign from my media job, pack up and rent out my house, research schools and locations in Bali and try to explain to a 6-year-old what living in the tropics was going to be like.
I had read about the terrible Bali bombings, but after having lived in London during the IRA campaign, I was not going to let this be a reason not to go, my philosophy was if we didn’t like it we could just go home.

Through my daughter’s school I made instant friends. Living on the beach meant there was lots of after school socialising, kids could play together safely without any thought of anyone snatching them. Sanur, with its coral lagoon beach, meant they could run and play safely. Cheap warung’s (local restaurants) on the beach meant easy meals for the mum’s.
Within ten days, I had rented a home and I found myself riding a motorbike. This was something I certainly didn’t expect! One daughter on the front and one on the back, full face helmets and a self-imposed speed limit of 20kms per hour. We pootled around unharmed like this until they were too big to fit anymore.

After twelve months in Bali, I realised that I wouldn’t be going back to live in London. I considered investing in a holiday rental Villa. I found the gorgeous development called Kejora, a complex of 16 Villas in a prime beachfront location in Sanur. We tweaked the plans, agreed the price and a year later in May 2011, I opened Sixteen Kejora to my first guests.
It was during chatting to my guests when they began telling me of the risks they had heard about coming to Bali.

The warnings on government websites did not reflect what regular visitors or expats experienced. Yes, the bombings in 2002 and 2005 were horrendous but the Indonesian government, police, hotels and Banjars (local communities) were doing everything to prevent those atrocities from ever happening again.

These risks are not unique to Bali.

We also see the news reports about the high-profile drug busts, where the penalties are severe, but it’s highly unlikely that holiday makers are going to get caught up in drug smuggling.
Sensible precautions and common sense can easily overcome these risks.

The worst that has happened to my girls and I in over eight years of living in Bali was an injured leg for my youngest daughter. We arrived in the clinic and were in with the doctor within no time, she had lovely neat stitches.

The beauty of the Island and the gentleness, kindness and good nature of the people are what makes Bali such a special place.
Life is full of risks and adventures and from my experience Bali is by far paradise than peril.

This website uses cookies to improve your experience while you navigate through the website. Out of these, the cookies that are categorized as necessary are stored on your browser as they are essential for the working of basic functionalities of the website. We also use third-party cookies that help us analyze and understand how you use this website. These cookies will be stored in your browser only with your consent. You also have the option to opt-out of these cookies. But opting out of some of these cookies may affect your browsing experience.
Necessary Always Enabled
Necessary cookies are absolutely essential for the website to function properly. This category only includes cookies that ensures basic functionalities and security features of the website. These cookies do not store any personal information.
Non-necessary
Any cookies that may not be particularly necessary for the website to function and is used specifically to collect user personal data via analytics, ads, other embedded contents are termed as non-necessary cookies. It is mandatory to procure user consent prior to running these cookies on your website.
SAVE & ACCEPT